It's 8:08 pm, here in Boston and the five of us have spent the day hunkered down indoors listening to the storm rage outside. I had to shut the blinds because the view was so depressing. The storm is getting progressively worse and I've been told to work from home again tomorrow. Mike got the day off and his cooking class was cancelled. Truth be told, I think everything in Massachusetts was probably cancelled today. We did manage to take the dogs outside this morning for a quick walk. The three of them did their business in record time and we all headed back home. I also managed to do a quick turn in the yard with them around 5pm, when it wasn't raining and the wind wasn't too bad. Must have been a lull in the storm.

I put in a full day of work and Mike was busy in his home office shredding documents, then he practiced his guitar for a while. When I finished my virtual work day, I ran a load of laundry, baked some brownies and embroidered some dog bandannas. Here is Larry in his new finery. Please note that Larry does not have blue eyes, it's the camera flash, apparently the equivalent of human red-eye. 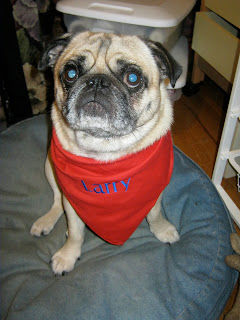 I also made a pair of bandannas for our cocker spaniel friends in New Jersey and still need to make one more for Joannie's Boston Terrier, Alli.

Now we have clean underwear, batteries, and brownies, so we are prepared to ride out the storm! 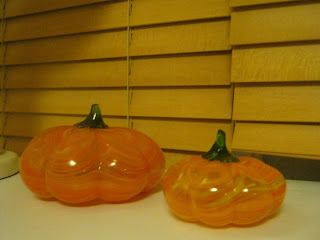 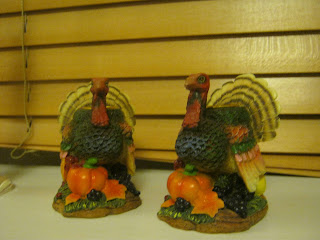 I don't go too overboard, just a couple of glass pumpkins, a pair of turkey candlesticks, bought inexpensively at Joann Fabrics and The Christmas Tree Shop, respectively, and some seasonal placemats and quilts. 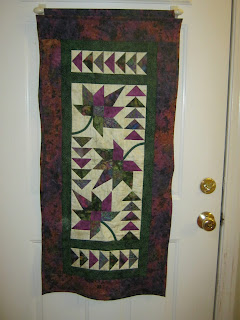 I made this table runner/wall hanging in a class with Deb Tucker a couple of years ago. 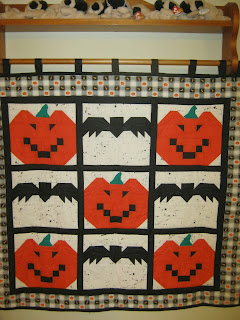 This is a very old Debbie Mumm pattern. I made it at least 14 years ago, because it used to hang in my Newton apartment before I bought my house. 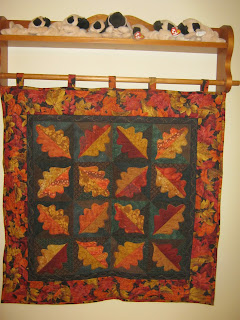 I forgot about this Leaf quilt until I went to look for my Halloween quilt. This was a kit that I purchased on a trip to Minneapolis back in 1999, but I only finished it a few years ago. I think I  bought a pumpkin quilt kit too. I'll have to search the UFO closet and make it for next year. There is also a Turkey quilt, but I will hang that (and post a photo) closer to Thanksgiving. 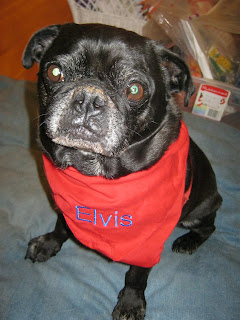 Elvis would like you to know that he already HAD a bandanna. Doesn't he look handsome? Romeo also has a bandanna, but he was camera shy today.

The storm has claimed the top of our Pug weathervane... let's hope that's the sum of our storm damage. Hopefully one of our neighbors will find it and bring it back.

Come back on Wednesday for a special Howl-o-ween photo (that's a clue)!