Attack of the Killer Cleaning Fairies

There's been a serious cleaning bug going around here lately. I think it may have started in my quilting studio, and now it's spread across the yard to my house. A few weekends ago, Mike helped me clean out the linen closet. One Sunday evening, we took EVERYTHING out of the linen closet, sorted, purged, then put the surviving items back in. We discovered that we owned a heating pad. I found some old towels that my Mom gave me from our house growing up. She got them for HER wedding. They just won't wear out. They're still good enough to mop up a spill.We took all the sheet sets and put each of them inside one of the matching pillowcases. I read this tip in a magazine. I can never get the fitted sheets folded nicely anyways. We put two blankets and two sets of sheets in a bag for goodwill and there's a third set of sheets that will be heading there shortly. In celebration, I bought us a nice pair of 300 thread count cotton sheets from LL Bean.


This weekend, no sewing was done as the cleaning fairies continued their assault. On Saturday, Marion came over and we spent three hours organizing the business fabric in the Quilt Studio. We were relentless and went through every box of inventory. We found some long lost treasures and also realized we had run out of red flannel. We sorted out a box of fabric for my friend Sue who teaches quilting at a local womens' shelter as well as a bag of scraps that Joannie will donate to her friend who runs a troop of Girl Scouts. We had a scrumptious lunch at the Fifties Diner when we finished.

This morning (Sunday) I woke up and started working in the yard. First, I trimmed everything that was dead. Then I weeded the garden on the corner and planted some black-eyed susans, since all of the day lilies have died back and are now just a bunch of green leaves. This looked so nice that I was inspired to weed the garden alongside the front fence. Three hours later, I had three bags of yard waste to show for my hard labor. After a delicious egg white omelet made by Chef Mike, I took a shower, then headed out to do some errands. I bought some more black-eyed susans and some purple coneflowers for the garden, which I will plant later.

When I got home, Mike was heading out for a bike ride. I went upstairs and did some more cleaning in my office/upstairs sewing room. I'd like to eventually move all of the fabric in the Quilt Studio, but first I had to get this room clean. I hadn't seen the floor in months. I wasn't able to shut the door to the fabric closet. I was afraid to take a "before" photo in case someone sent it along to the casting agent for Hoarders.

I'm trying to use all the same size and same type of box so it is easier to stack them. I like the Iris box that has a hinged lid (one less thing to lose). It's interesting to see that my stash of just regular quilting fabric is diminishing, while my stash of batiks and Kaffe Fasset grows. I still have a lot of floral fabric, Asian fabric, and holiday fabric. When I sorted, every piece of fabric had to be a fat quarter or larger to go in the box. All scraps were put into a rattan hamper to be sorted later. I was able to use just one box for all the yellow, orange, green and brown fabric. Pink fabric has its own box. Blue fabric has two boxes. Red fabric and purple fabric share a box--I put a serious dent in my purples when I made Anna a purple quilt a few years ago. I put aside a couple of boxes of fabric that I am going to sell on Etsy (some woven plaids, some tiny florals and some beige tonals).

It looks really good now! I can see the floor! I can see the top of the ironing board. I found my missing camera, that had been missing for so long, I had been forced to buy a replacement. As usual, I found four or five bags from finished projects that have bits and pieces of fabric in them. I need to sort them and put them away. For my next project, I have bought three, three-drawer plastic carts at Target and I'm going to put my scraps in them, sorted by color, ala Bonnie Hunter, my quilting idol.

Watch out, the killer cleaning fairies may be heading to your house next!

Exhausted! I am heading for bed. Going to work should seem easy after this cleaning-fest!

Pugs and kisses,
Nancy
Posted by PugMom at 10:03 PM No comments:

A House Full of Quilts

Last weekend, Mike and I went to the Cape (Cape Cod for any non-locals) to spend the weekend with Marion and Merwyn. Marion's daughter has a lovely home right on the ocean and Marion gets to use it when Susan and her family are away. Thanks Susan!

We would have like to have gone with them for the whole week, but Mike and I are both running out of vacation time since we took two and a half weeks of vacation for our wedding. 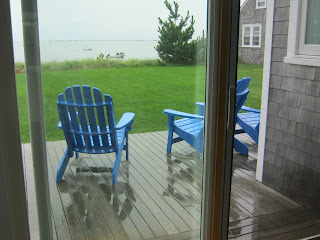 It was a rainy Saturday. Marion and I decided that we would wait until Sunday to visit the craft fair. We set up our machines in the kitchen/dining area.

Merwyn kept busy on his laptop while Mike played his guitar. 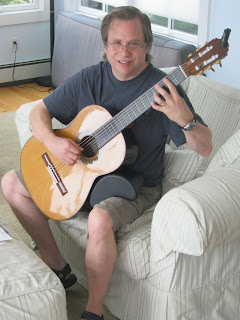 Marion, like most quilters, gives away most of her quilts as gifts. Her daughter is one of the fortunate recipients. Almost every bed in the Cape house had a quilt on it. I decided to give you all a little show! Like most summer homes, the bedrooms are small (to encourage you to spend more time on the beach), so I did the best I could when taking the photos. Sometimes I just couldn't back up far enough to get the whole quilt in the picture.

Have a great weekend!

One of the best things about being in a quilt group is sharing and learning from your peers. You are constantly inspired by seeing new fabrics and patterns. At our most recent quilt weekend, this technique was spreading like wildfire across the room. Debbie had made it before and two of her tablemates, Lexine and Valerie, had caught the Twisty Bug!


And the funniest thing is that when I went to my other quilt group on Thursday night, my friend Beth was making it too! Pat liked it so much that she stopped at Ann's Fabrics on the way home and bought the template!

Here is a similar technique that Terry was using.


Here are some more of the girls and their projects.


I'm fortunate to belong to two quilt groups. Both are "home-grown", non-guild groups that have evolved from groups at now defunct quilt stores. I meet weekly with my Thursday friends at the Hampton Inn and monthly with my Sunday Brown Bagger friends at the Courtyard Marriott.

Brown Baggers was originally at The Quilter's Nook in West Roxbury, MA. We met on Friday nights after work. There was also a daytime group. They brought their lunch in "brown bags", hence the group name. We used to go eat dinner at Friendly's afterwards...maybe we should have been the Friendly Quilters. Anyway, the Brown Baggers have been together almost 18 years. I used to write a monthly newsletter...Kim brought in Volume 1, Issue 1 along with a couple years worth of others.
We had a good time reading through them and remembering old times and old friends. We started off with 10 members. We still have seven of the original ten, and we're currently at around 20. Our room at the Courtyard only holds 16, but luckily we never seem to be in the same place all at once.

Last weekend, we held our annual August weekend (the Brown Baggers have 6 each year--3 locally and 3 away). We had 14 attendees.

Here is our weekend in pictures, which will tell the story better...


Kim and Karen brought a box of quilts that Kate and Justin Mitchell had quilted for some of the girls. The first three quilts below belong to Nancy D.

Here are some photos of the girls and their projects...


I will write more on Sunday. Mike and I are supposed to be packing to go away for the weekend. Hopefully this photo-filled post won't blow up your computer.

Pugs and kisses,
Nancy
Posted by PugMom at 5:56 PM 1 comment: