My husband Mike loves to cook. The first time he offered to make dinner for me back when we began dating, I offered to pick up the groceries. One of the items he requested was "shallots." I had no idea what they were. I had to ask the man in the grocery department for assistance. Shallots are not to be confused with scallions. Shallots are little brown things that look like tulip bulbs. Scallions are long and skinny green things. Both of them kind of taste like onions.

Dinner in our house is never a simple affair. Mike prefers recipes with at least 27 ingredients, the more obscure the better. He loves to visit the Indian grocer, the Chinese grocery store or search several supermarkets for the perfect piece of lamb. Often it takes him two hours to create what we eagerly scoff down in just 15 minutes.

Last night we had leftovers for dinner. Poor Mike hurt his arm last week in Maine, so I actually made chicken Parmesan (one of the few things I can cook that is edible) on Friday for dinner. I made extra so Mike wouldn't have to cook over the weekend, but he offered to make a salad. My salad comes out of a bag and my dressing comes out of a bottle. 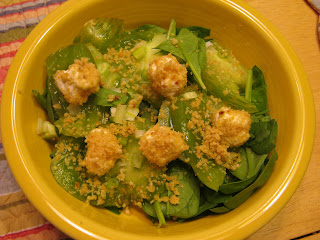 This salad is made of baby spinach and heirloom green zebra tomatoes that Mike raised in our garden. He made the salad dressing from scratch. And the little brown things that look like croutons are actually hand-rolled balls of goat cheese that Mike coated in toasted pine nuts that he crushed in his food grinder. I love a man with a food grinder!

Pugs and kisses,
Nancy
Posted by PugMom at 10:13 PM No comments:

In a New York State of Mind

I am proud to show you both of these finished quilts, which I blogged about previously in June at http://pugmomquilts.blogspot.com/2012/06/new-york-city-quilts.html


Here is a full view of my Mom's quilt. 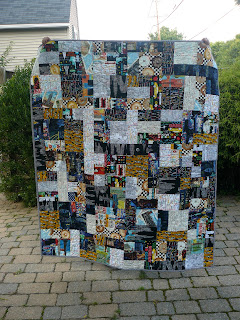 Here is the second quilt that I made for my Uncle Stanley. 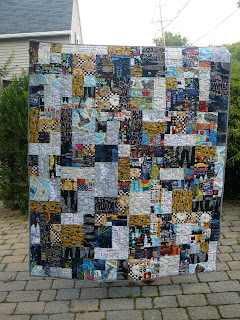 I usually try to buy inexpensive fabric for quilt backs or piece them out of leftovers from the front, but these are special quilts for a significant birthday! I was tickled to find both Hawaii and Florida fabric at eQuilter, one of my favorite online quilt stores http://www.equilter.com/

I think there will be at least a third New York quilt in the series, since when I presented the tops to my Mom and my Uncle at their party, my sister-in-law Diane went NUTS for them and shyly asked for one of her own. SSShhh, don't tell her!

Mom--your quilt will be in the mail next week as soon as I sew the label on the back!


Two blog posts in one day! Must go downstairs and pay some attention to my darling Hubby Mike!

Pugs and kisses to all,

Have Machine Will Travel

Last weekend, Mike and I went up to Maine to celebrate his brother-in-law's 50th birthday. It was a small gathering with 75 of Paul's closest friends (which was bigger than our wedding, Mike pointed out). We drove as far as Camden, Maine on Thursday and rented a small cabin outside of town for two nights. On Friday, while it was beautiful back in Boston (or so all my friends told me), it poured all day where we were. Nevertheless, we were quite happy in our little cabin. Mike played his guitar and I read a couple of books. On Saturday afternoon, we drove up to Castine, where the party would be. Paul's family has a lovely place in Castine, on a lake. Saturday night was a bring your own main course (Susan provided side dishes and dessert) cook-out with a live blue-grass band. I was tired, so Mike took me back to our bed and breakfast around 9pm, then he went back for more festivities, which included fireworks and a song written especially for Paul (the birthday boy). I went happily to sleep with a new quilting magazine and Kaffe Fassett quilt book. Mike crawled into bed around 1am.

On Sunday, outdoor activities had been planned, but it rained for most of the day. Despite the weather, many of the women went out for a 2-hour power-walk, while the men played golf on the lawn. There were about 18 kids gathered in the living room watching SpongeBob on television, so I set up my travelling sewing room in an unfinished room upstairs that overlooks the lake.

My brother-in-law, Paul, was kind enough to set up a card table and find me a chair. I had my sewing stuff in the back of my car, which included an extension cord reel, my Ott light, a pillow, an iron, a dual ironing pad/cutting board, plus my bag of sewing tools and my sewing machine, so I was all set to go! Mike loaned me his iPad (seen on the stepladder at right) and set up Pandora for me, so I even had fun tunes to listen too!

The sun came out at 3pm, and Mike went on a boat ride with some of the other menfolk. I finished the binding on my quilt! We celebrated Paul's birthday some more on Sunday night with a catered lobster dinner and sang Happy Birthday to him. Susan, Mike's sister/Paul's wife, had bought 50 Japanese lanterns, which we lit and they rose up into the sky and sailed over the lake. It was a magical sight!

Happy Birthday Paul! (disclaimer: Paul's actual birthday is next month, but we took advantage of Labor Day weekend). Mike will celebrate his 50th birthday in about two weeks!

Pugs and kisses,
Nancy
Posted by PugMom at 3:45 PM 1 comment: