On Sunday, I slept late and then I sewed in my pajamas most of the day. After spending 20 minutes looking for the project I intended to work on, I gave up and trimmed up Sam's quilt, which came back recently from my friendly machine quilter, Terri. After I trimmed off the excess batting, I very carefully separated the fabric and batting into usable larger fabric pieces, scraps for my friends Janet and Sandie, and pet pillow stuffing. I almost never do this, so I was quite pleased with myself. I also found the leftover backing pieces from my brother Jeff's Star Trek quilt that I gave him last October and did it to that fabric as well.
I have the binding made and ready to put on Sam's quilt but I decided to put it on another day. I still hadn't found the project I was looking for, so I opened the box of four fleece blankets that I had pinned together in January when I had a large table to work on.

I started sewing together the fleece and minkee blanket for my friend MaryKate, who is my birthday twin (we share the same birthday). She likes the Baltimore Ravens, so I used Baltimore Ravens fleece and purple minkee for the back. If you haven't used minkee before, it is soft and delicious to cuddle with but it slips and slides when you are sewing!

After I finished sewing the right sides together, I turned the blanket right side out and got ready to top stitch it and close the opening. While I was trimming it, I managed to cut a large hole at the top of the blanket. The minkee moved underneath while I was trimming the fleece. I did NOT take a photo. After saying several choice swear words, I moved the seam line over and resewed the hole closed.
Finally I found the bag with the project in it that I had been looking for. I am making a purple patchwork Chubby Charmer tote bag for Anna, one of the girls that works at my veterinarian's office. I had finished most of it at our late January quilt weekend at the Cape. I top stitched the handles and attached them to the bag. I assembled the bag. Then I went to put the velcro on the sides. (You can collapse the sides with the velcro and make the bag smaller, it's a nice feature.) I've made this bag at least a dozen times. The first two pieces of velcro went on without a problem. I put the third piece of velcro on and when I looked inside the bag I had somehow folded the lining over and made a wrinkled mess. Again, NO photo, but more choice swear words were uttered. I forced myself to unpick the stitches and resew the velcro. What a pain! But I couldn't leave it looking like that. Fortunately, the fourth piece of velcro went on flawlessly.
All's well, that end's well.

P.S. The hat is available for purchase on Zazzle if you need one too.
Posted by PugMom at 3:32 PM 2 comments:

Time for another Row by Row Reveal! Eight intrepid Brown Bagger quilting friends exchanged the first rows at our October meeting. In this post, you can see the start of our quilting adventure.  At our March meeting, the finished quilt tops were revealed.

The people in my group were Joannie, Debbie and Kate.
The second group of Row by Row swappers consisted of Sally, Kim P. (our fearless Row by Row organizer), Nancy D., and JoAnn E.
Everyone had a lot of fun. Give me a few months to rest up and I'll be ready to do another Row by Row!

We also celebrated the March birthdays and exchanged birthday blocks. Happy birthday to Sally, Pat, me, Terri, Jean and Emma!

Linking up on Friday to Confessions of a Fabric Addict and Crazy Mom Quilts. Thanks for visiting!

Happy Birthday to Me!


A belated Happy Birthday to ME! I took myself to Florida last Saturday night for a whirlwind trip to spend my birthday with the three humans who love me the best!

We spent Sunday afternoon with my dear friend Anna, her husband Ben, their adorable son Logan and their two cocker spaniels, Jasper and Frou.
On the morning of my birthday (March 14th, aka Pi Day), Mike took me here: 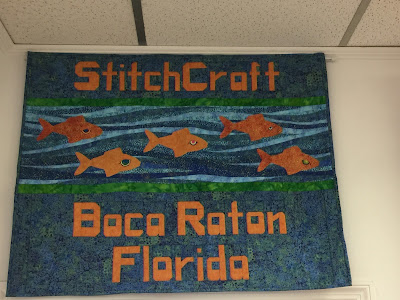 Yes, I went back to StitchCraft! I went there last January.
I didn't buy the whole bolt, but I did find some other goodies there as well... sorry no photo but the nice ladies at StitchCraft mailed my purchases home so I didn't have to worry that my suitcase would be overweight on the flight back.

My friend Kat who blogs at Made with Love and Ladybug Hugs joined us for dinner at Rosalita's for my birthday. 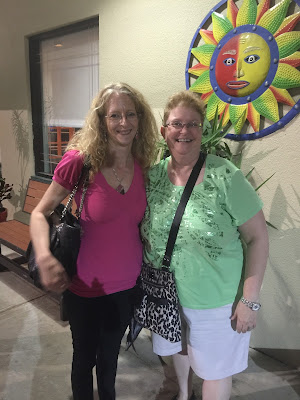 Mike and I also took my parents to the indoor flea market and we squeezed in a quick trip to the beach on Tuesday before we left.
And here's a St. Patrick's Day greeting for all my pug-lovin' Irish (or Irish wanna-be) friends and blog followers. 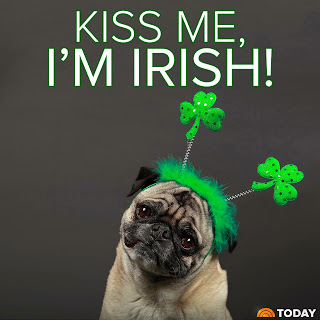